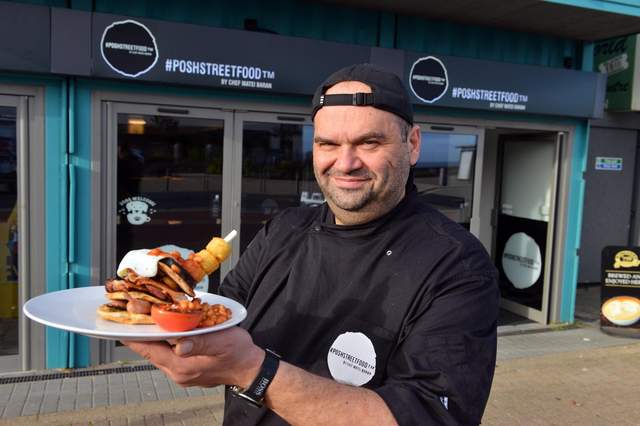 Read the article online or see the full story below:

Former Masterchef the Professionals quarter finalist Matei launched his business Posh Street Food in November last year after building up a loyal following in lockdown with his mobile kitchen which led to him and his team competing in the Northern final of the British Street Food Awards.

The restaurant, which is located at Stack Seaburn, offers everything from loaded breakfast stacks through to posh kebabs and Sunday lunches.

But last night, July 14 saw the start of a monthly foodie event with a ‘taste of Northumberland’ being brought to Wearside.

Following his successful opening at Stack, the Chef has now launched the monthly event with a selection of themed foods.

He said: “Since we opened the place here in Seaburn, I decided every month to do a menu tasting with different dishes as private dining.

“Every month we do something different, so we’ll have an Asian inspired night, this one was Taste of Northumberland so we have used locally sourced products like Northumberland sourced beef and cod so it’s all local.”

Unlike most of the food traders at Stack, Posh Street Food has its own sit-in restaurant with around 30 covers occupying a prime spot at the front of the shipping container village.

Matei added: “I have a straight forward concept to be different to everyone else, it’s a lot of work behind the scenes, I do dishes which I have done in different restaurants as well as new ones and they’re really good so I hope people come to see the difference between the average takeaway and what we do here.”

The restaurant’s next event is set to be ‘a taste of the world’ on Wednesday, August 24. A full menu and tickets can be found here at mateibaran.co.uk/product/taste-of-the-world/